The township is believed to have been named in honour of Chief Chinguacousy under whose leadership Fort Michilimacinac was captured from the Americans in the War of 1812.

Although heavily covered with pine forests in the early days, the area developed into prime agricultural land.  The Etobicoke and Credit Rivers flowing through the township in a southerly direction provided abundant waterpower in the early period of settlement, which began after 1818, when a large tract of land was purchased by the Crown from the Indians.

The township was surveyed in 1819 and land was granted to descendants of United Empire Loyalists and immigrants from the British Isles and the United States.

Charles Haines, in 1828, erected one of the earliest mills in the township at Cheltenham.  James Curry’s mill, built about the same time, stood near Norval.

Chinguacousy’s first township clerk was John Scott, appointed in 1821. He was followed by William Johnson in 1822 who held the office for twenty years.  In those days the town clerk was the head of local government.  Other municipal officers elected at the first “town meeting” of the township’s citizens were:  Amos Stafford and Asa Ingram, assessors; James Curry, tax collector; John Laffler, John Tolfray, James Buntan, Robert Trimble, pathmasters; James Buntan, poundkeeper.

By the mid-1800’s the township had a population of about 7,000 settled in small villages and hamlets such as Cheltenham, Victoria, Tullamore, Terra Cotta, Snelgrove and Campbell’s Cross.  Township farms produced large wheat crops and manufacturers made, among other goods, barrel staves and timber products.   All this, including raw timber, was hauled to Port Credit from where it could be shipped by boat across Lake Ontario to markets.

Until the 1830’s the township’s main business centre had been a small tavern at Salisbury in the vicinity of present day Brampton.  Here the magistrate dispensed law and people did their trading in a store attached to the tavern.

Brampton came into being in 1834 when John Elliott laid out village lots for sale and named the place Brampton for his home in Cumberland, England.  William Buffy had erected the first building, a tavern, at the site and later Judge Scott had built a store, a pot ashery, a mill for grinding and chopping grain, and a distillery.  Brampton remained part of the township until 1852, at which time it was incorporated as a village.  By the 1870’s Brampton was the county town and the business and manufacturing centre of the township.  In the twentieth century Bramalea, a satellite city with a large number of industries which had developed east of Brampton, became the township’s urban heart.  Here an imposing four-storey “people place” officially known as the Chinguacousy Civic Centre, was opened by the Honourable William G. Davis, Premier of Ontario, on September 25, 1972.  Three sections, linked by the Town Square – a spacious indoor plaza – house a theatre, theatre workshop, communications centre, council chambers, offices and committee rooms, postal facilities, dining room and lounge, a public library and art gallery, arts and craft rooms and studios, cable TV studio and a banquet hall.  Created as a place where people could meet and mingle, the Chinguacousy’s ultra-modern Civic Centre of steel, concrete blocks, and bronzed tinted glass is a far cry from the little tavern at Salisbury a century and a half ago.

With the advent of regional government in Peel County, the municipality of Chinguacousy Township with 130 square miles, the largest of Peel County’s townships, ceased to exist on January 1, 1974.  Part of Chinguacousy was annexed by the city of Brampton and part by the newly created town of Caledon. 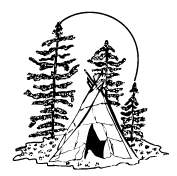 Chinguacousy Township was opened in 1819 and named, probably in honour of a loyal Chippewa chief who fought at the capture of Michilimackinac. His name was Shinguacose, “the small pine.” Born to a Scottish officer and Chippewan mother, Shinguacose died around 1858. The name of the township may also be from an Indian word meaning “the place where young pines grow.”

Wikipedia:
The river became known as Missinnihe, or “trusting creek” to the Mississauga First Nation people who met annually with white traders there. To the first nations, the river was “held in reverential estimation as the favourite resort of their ancestors”[5] and the band, which ranged from Long Point on Lake Erie, to the Rouge River on Lake Ontario, became known as the Credit River Indians. Their descendents are today the Mississaugas of the New Credit First Nation.[5]

The origins of the English name come from the time when French fur traders supplied goods to the native people in advance (on credit) against furs which would be provided the following spring. It was known as the Rivière au Crédit. The trading post was set up at the mouth of the river, in Port Credit, in the early 18th century.